The earliest known inhabitants of the Fiddich valley were Picts. Traces of their occupation remain in the shape of the mysterious 'Elephant Stone' and a weathered Pictish cross almost six feet high.

A Christian community was started in 566 AD when St Moulag founded Mortlach Church, one of the oldest Christian settlements in Scotland.

There is a legend that King Malcolm II extended the church three spears' lengths as a thanksgiving after defeating the Danes on the haugh below the church in 1010. The north wall with its postern door has a leper's squint and in the graveyard is the watch-house used to guard against body-snatchers.

St. Mary's Catholic Church, built in 1728 is situated near the bottom of Fife Street. In need of extensive restoration you can click here to find out more.

Balvenie Castle was built in the thirteenth century by the Comyn Earls of Buchan and visited by King Edward 1 of England. It was retained by the Stewarts, Earls of Atholl, from 1459 to the seventeenth century. In 1562 Mary Queen of Scots spent two nights at the castle on her northern campaign against the Gordons; it gave refuge to the Marquis of Montrose in 1644 and was stormed by the Royalists in 1649. In 1689, after the Battle of Killiecrankie, victorious Jacobites occupied it. The castle was last occupied by government forces in 1746.

Dufftown itself was founded in 1817 by James Duff, 4th Earl of Fife, It was built close to the hamlet of Laichie to give employment after the Napoleonic wars.

Like other villages of the period, Dufftown has spacious streets laid out in a regular plan. The four main streets converge at the Clock Tower, which was complete in 1839. It was originally the town jail, later the Burgh Chambers and now houses the Tourist Information Centre.

The clock is known locally as "The clock that hanged MacPherson". MacPherson of Kingussie was an infamous freebooter condemned to death at Banff in 1700 for robbing the rich and giving it to the poor. The local inhabitants raised a petition for his reprieve but when the pardon was on it's way, MacPherson's arch enemy, Lord Braco, the Sheriff of Banff, put the clock forward a quarter of an hour to make sure MacPherson would hang. Sometime later the clock was removed from Banff and installed in Dufftown's tower.

Dufftown's perfect water sources soon saw it become a centre for the distilling industry - both legal and illegal. Today, its distilleries produce some of the most famous whiskies in the world, including Glenfiddich, Glendullan, Kininvie, Mortlach, Balvenie and Dufftown-Glenlivet. 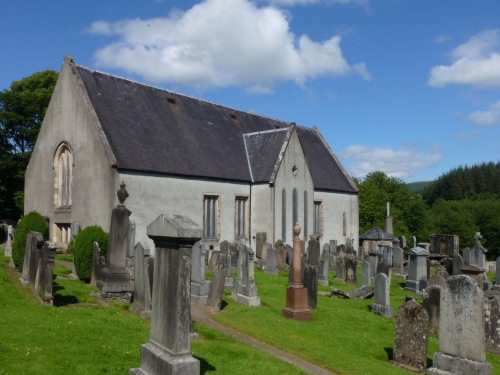